Sometimes, making spontaneous plans works out to be incredible.  Such is the experience I had when I stumbled on this place in Abu Dhabi called Punjab Grill.  I was touring the Grand Mosque, which by the way I should also write a review on as it was amazing…and after soaking in the breathtaking mosque and taking hundreds of photos…I was hungry!  I was with a few friends and we all agreed that Indian food would hit the spot after the long drive to Abu Dhabi from Dubai and after the long tour of the Grand Mosque.

As many tourists do, we used Google to find Indian Restaurants close to The Grand Mosque.  The closest we found was Punjab Grill, only 5 minutes away.  Sometimes the closest isn’t always the best, so I read a few reviews and the comments were incredible “Great ambiance”, “Creative dishes”, “Excellent service”.  So as most would do, I looked at a few photos of the place and was totally sold to the idea of trying it out.  Here is how the entrance appeared:

As we entered, I noticed the ambiance was indeed in line with the reviews….warm and very inviting with beautiful lighting, spacious, elegant table settings, and a classy feel.

Now, the company I was with had unique and varied dietary preference,  with one being strictly vegetarian and gluten-free.  The staff was so incredibly kind and helpful, in fact, the waiter asked the chef to visit our table so get a sense of what we would like.  Before the meal, bread was brought for us to munch on…it included naan and focaccia bread, which I thought was a nice and unique touch.  Then, to our surprise, the waiter said that chef prepared some gluten-free bread for us as well.  Now this was really a treat since no other restaurant has been so accommodating.

Let me now show you a flavor of what we experienced next: 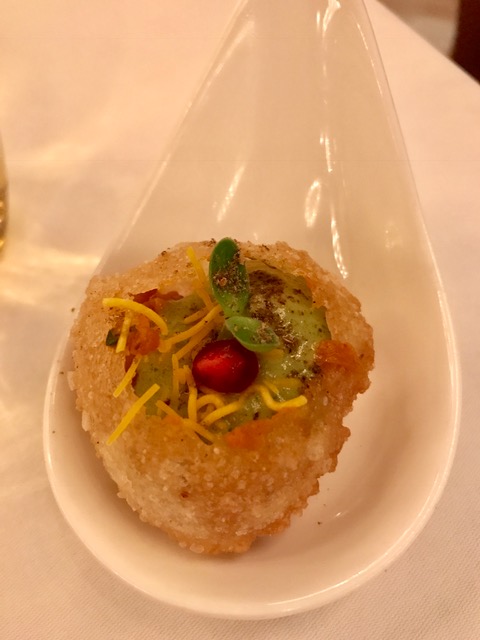 Check out these appetizers!  Pani Puri, Naan served with a great selection of chutney and a Watermelon Slider…not just were they tasty, but the presentation was so creative.  I was a bit skeptical after seeing how good the food looked, but was not disappointed at all after tasting it.

Now on to the main course…

This was, by far my favorite dish.  This is Malai Kofta (“Malai” means cream and “Kofta” means deep fried dumpling balls, usually made with vegetables, potatoes and sometimes with cheese added) Punjab Grill did something very unique with this dish, they served it with two different sauces so that we can experience different flavors…

The Daal Makhani was another treat…(pronounced daal makh-nee, “buttery lentils”) is a popular dish from the Punjab region of the India.  You could tell that the preparation of this tasty dish took a while as it tasted simmered and seasoned to perfection. 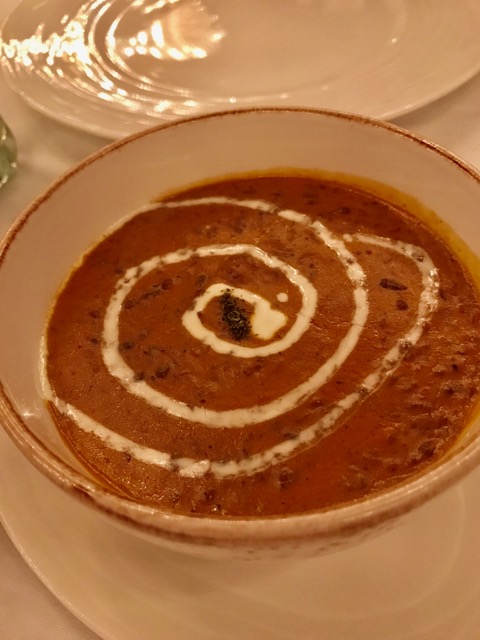 Bhindi, Okra is one of my favorite Indian dishes…so just had to try it here.  I was not disappointed at all.  It was coated and fried.  I know some don’t like the idea of deep frying, but trust me, this is worth it as there is very little oil and a lot of good taste to this dish.  Don’t miss this one: 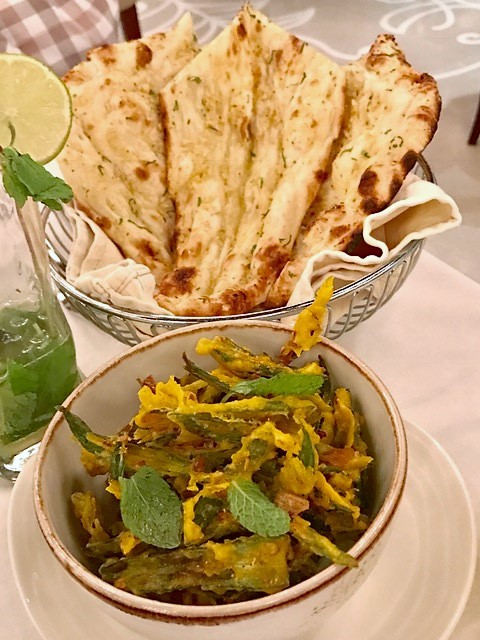 After all this delicious food, we were planning to skip dessert…that was until they brought it out!

The Indian Jalebi (think bright orange funnel cake-like rounds that are deep fried and then doused in a sticky sugar syrup) and Spanish churros have been named as some of the most fattening foods in the world, so it goes without question that the next logical step was to combine the two. Served with a generous lashing of cream and chocolate, this is indulgent dessert is available at Punjab Grill at the Venetian Village.

We were so very impressed with Punjab Grill, such courteous staff, perfect ambiance, excellent food, good service. When we were leaving, I felt as if I would never have an amazing experience…so I suggested to the manager that they should open one in Washington, DC…to my surprise, he said its in the works and will open soon right in the Nation’s Capital…Washington, DC!!

Stay tuned for a review on that…from yours truly, My Savvy Travels! 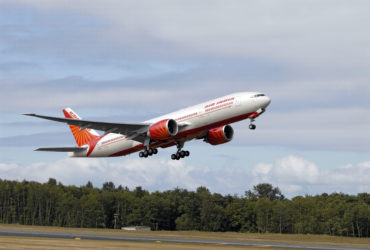